Sunday, January 17th, is Respect Life Sunday. It is in anticipation of the anniversary of Roe v. Wade, the infamous U.S. Supreme Court decision legalizing abortion which was handed down on January 22, 1973. Special prayers will be offered in all OCA parishes. On January 22 our hierarchs, seminarians and thousands of Orthodox Christians will take part in the March For Life in Washington D.C. As it falls on a Friday we ask all of our parishioners to observe a strict fast on that day and to offer as many prayers as possible for our country, for the women who have undergone an abortion and for those who have chosen not to and thus have chosen to give life to their baby. We are reminded that throughout the year we collect newborn and infant needs and provide them for distribution to mothers who have chosen life. Now is an appropriate time to purchase these types of items and to bring them to the parish.
On Wednesday, the 20th we will celebrate a Moleben for forgiveness of the sins of our country at 7pm.

Once again a large contingent of Orthodox Christians from across the country joined in the annual March for Life. Held every year to mark the anniversary of Roe v. Wade, the Supreme Court case legalizing abortion, the march gives voice to the majority of Americans who hold all life to be sacred from conception to natural ending. Fr. Joseph again was present with many other Orthodox Christians, both clergy and laity, to lend support to this noble cause. For the first time all of the hierarchs of the Orthodox Church in America were present for the march. The OCA is the primary Orthodox presence at the March. We pray that this national tragedy of abortion will soon end.

ORTHODOXY HOLDS THAT ALL LIFE IS A SACRED GIFT FROM GOD FROM THE TIME OF CONCEPTION.

FR. JOSEPH ATTENDS THE 2009 MARCH FOR LIFE IN WASHINGTON, D.C.

Fr. Joseph again attended the March for Life held every year on January 22nd to mark the anniversary of Roe v. Wade, the infamous U.S. Supreme Court decision legalizing abortion in America.  A crowd, estimated at more than 250,000, gathered on the mall of our nation's capital to pray for relief from the slaughter of our pre-born children which occurs at the rate of about 4,000 per day or 1.2 million a year. This gathering was on the same spot where two days earlier a vast crowd met to witness the swearing in of a man as president, who himself, promised to be the most "pro choice" president in our country's history. Prayers and speeches from religious leaders including Metropolitan Jonah and speeches from a number of pro-life congressmen and women and senators rallied the crowd to continue its efforts to seek the protection of the most innocent and the most vulnerable in our midst.  Then a march to the Supreme Court building began. The large Orthodox contingent, while carrying banners and icons, sang over and over: "O Lord, grant victory to the Orthodox Christians over their adversaries and by virtue of Thy cross protect Thy habitation." In front of the Supreme Court, Metropolitan Jonah celebrated a Panikhida for the slaughtered innocent.  At the end, His Beatitude entreated all to continue to work to protect life from conception to its natural end.

Fr. Joseph gives a homily on the slaughter of the Innocents by King Herod and how it is continuing today. (Click Here)

Zoe is an Orthodox pro life ministry sanctioned by SCOBA (Standing Conference of Canonical Orthodox Bishops in the Americas). To visit their website click on ZOE.

St. Philip the Apostle Orthodox Church, of the OCA Diocese of the South, is centrally located in Tampa, FL serving the entire Tampa Bay area.
Our phone number is (813) 933-9807.
Schedule
Wednesday, January 19th
7:00 Communal Panikhida (prayer services for the departed)

Saturday, January 22nd
Day of fast and prayer for our counttry's sins of abortion.
5:00 Great Vespers followed by confessions

Sunday, January 23rd
9:30 Divine Liturgy
2:00pm Moleben for the Salvation of our nation for the sin of abortion in front of the U.S. Courthouse 801 N. Florida Ave. Tampa
Monthly Calendar >
SERMONS BY FR. JOSEPH 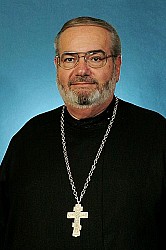 Macarius the Great of Egypt